Despite bearing vastly different climates and ecosystems, the Atacama Desert and Patagonia share a few animal species, which in many occasions surprise the visitor. Today, we invite you to get to know seven native species that you’ll find on both ends of the country.

If asked to describe two of the most contrasting landscapes in the vast geography of our country, many would probably agree that the Atacama Desert and the Chilean Patagonia present striking differences. Not only are they separated by thousands of kilometers, but the former is a desert climate with scarce rainfall and vegetation, while the latter boasts low temperatures with a temperate climate and a landscape surrounded by glaciers, fjords and canals.

Even so, both ecosystems share some similarities: they are hostile environments with extreme temperatures that the diverse species within must reckon with. Among these species, several are repeated at both ends of the country, evidencing their great capacity to adapt to the environment.

Discover seven animal species that you could very well find on your travels to places like San Pedro de Atacama and the Torres del Paine National Park, which, in addition to living together in the same environments, are closely linked to each other as prey or hunters. 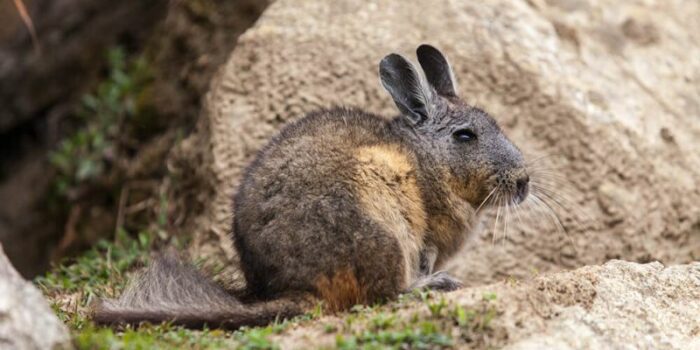 It may seem like a distant –and extravagant– cousin to the rabbit, but the vizcacha is actually more closely related to the chinchilla. This rodent, which usually enjoys sunbathing on the rocks, is abundant in Atacama and lives between 800 and 4,000 meters (2,624 and 13,123 feet) above sea level in the Andes, on steep and rocky slopes using holes and crevices as shelters. In the Magallanes Region, its population size is unknown. Although one can find vizcachas in both the north and south of the country, these actually correspond to different subspecies. The vizcacha that can be found in San Pedro de Atacama, Antofagasta Region, is the so-called common vizcacha (Lagidium viscacia), while the one that can be spotted in areas such as Torres del Paine or Guido hill, is the Patagonian vizcacha (Lagidium wolffsohni). Both subspecies are listed as vulnerable in terms of their conservation status. 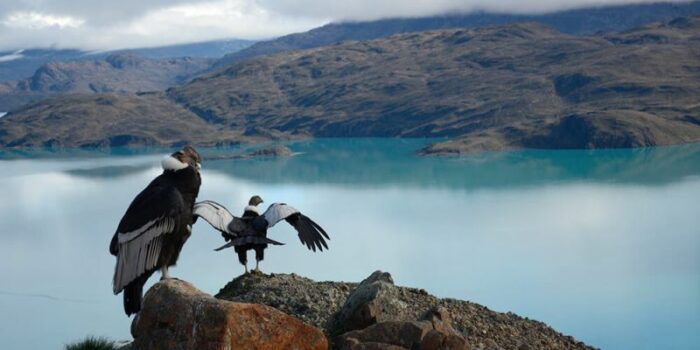 This emblematic bird of the Andes Mountain Range is found throughout the Chilean territory, from Arica to Cape Horn. It is gregarious, but it is common to see it gliding at great heights alone, or in groups of two or three. Its resting and nesting grounds are easily recognizable by the trail of white feces left on the rocks.

They occupy collective roosts in rocky sites called buitreras, which offer protection. It is a scavenger bird and very rarely attacks live animals unless they are young, sick or dying. Many times you can tell when a puma has killed a guanaco just by seeing the condors, since they fly in circles above the carcass. In this way, they warn the others, circling until they finally come down to eat as a group. 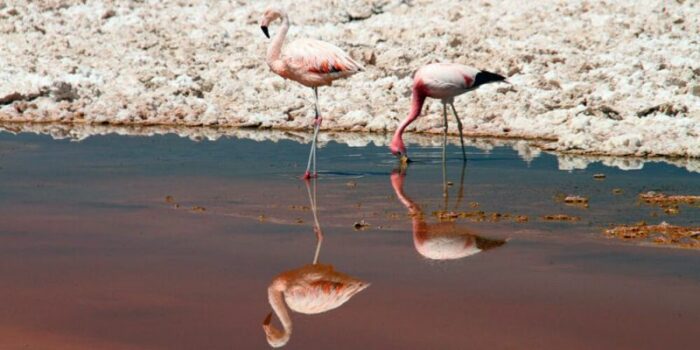 Flamencos in the Chilean Patagonia? So it is. While this species is usually associated with more desert-climate areas in the highlands of northern Chile, the Chilean flamingo (Phoenicopterus chilensis) can actually be found in the entire national territory but is concentrated in the north where it reproduces. In San Pedro de Atacama, the Chilean flamenco can be seen, along with the two other species of flamingos that inhabit the country (Andean and James), in areas like the Los Flamencos National Reserve.

In the extreme south, in the Region of Magallanes, populations are numerous in spring and summer, although they only nest in the Argentine Patagonia. It is common to find them in areas such as Amarga Lagoon in the Torres del Paine National Park. There is also a large population of flamingos in the Chacabuco Valley, Aysen Region. They inhabit areas of shallow, fresh and salt water, such as lagoons, salt flats or estuaries. Their nests are like cones without tips made of mud. It has been listed as threatened owing to egg-harvesting, hunting, water use and mining. 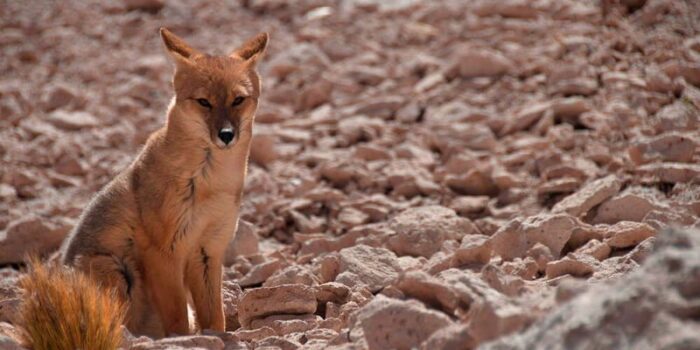 It is the largest fox in Chile and can be found throughout the country from sea level to 4,500 meters (14,763 feet) above, from Arica to Tierra del Fuego. Foxes are opportunistic hunters and feed on small mammals such as hares, mice and other rodents, like the degú and vizcachas. They also hunt birds and eat fruits such as molle and peumo. It is generally a solitary animal and can be observed during the day. It lives in different habitats, from mountainous terrains above the line of the forest to deep valleys and open deserts, pampas or temperate forests. 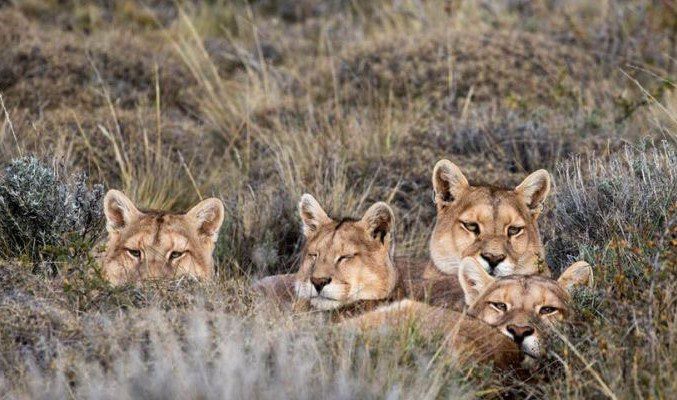 When one thinks of pumas, the first thing that comes to mind is probably the Torres del Paine National Park, a destination recognized for hosting one of the largest populations of pumas in the country. But the truth is that this feline can be found in almost all of continental Chile, from the northern limit with Peru to the Strait of Magellan.

Throughout Chile, the diet of the biggest carnivore in the country varies considerably according to the availability of prey. While in the southernmost region of Patagonia it feeds mainly on guanacos and European hares –as well as on other carnivores such as chingue and foxes– towards the foothills and high plateau of northern Chile it basically hunts wild camelids, such as vicuñas and guanacos, and domestic ones such as llamas and alpacas. Pumas also eat wetland birds such as the giant tagua and the piuquén. Their size also varies: in the south-central zone, for example, pumas generally do not exceed 35 to 40 kg (77 to 48 lb) of weight and 1.5 m (5 feet) of total length; in Aysen and Magallanes, however, individuals of just over 100 kg (220 lb) and almost 2.5 m (8 feet) in length have been captured. 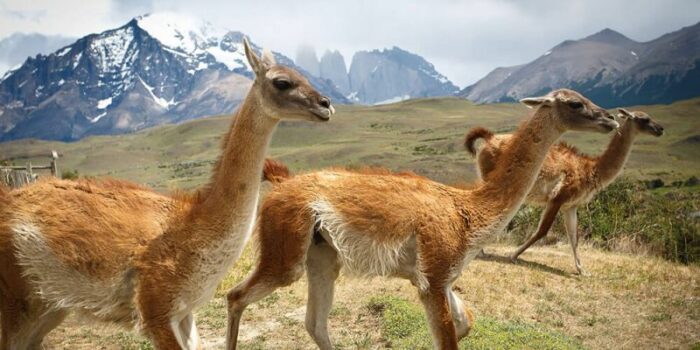 A recurring protagonist in photographs of Patagonia, the guanaco can be found in almost the entirety of the Chilean territory. It is common to find it in deserts, thickets and steppes from the pre-cordilleran area of the Arica and Parinacota Region, to the island of Tierra del Fuego and Navarino. Guanacos are usually found in groups consisting of a dominant male and several females, or sub-adult males that are non-breeding or old. It is often confused with the vicuña, another ungulate that inhabits the Chilean territory. The difference between the two is that the guanaco is larger, has a longer and dark face and lacks the white tuft on the chest. 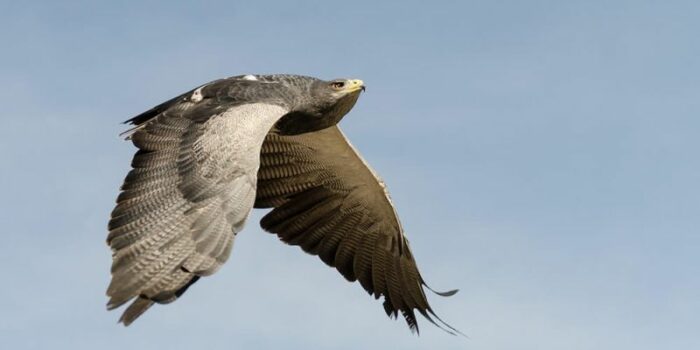 Also known as the Chilean eagle, the black-chested buzzard-eagle (Geranoaetus melanoleucus) is associated with the Andes Mountain Range and can be found throughout the entire Chilean territory, all the way down to the Cape Horn archipelago.

It feeds on small rodents, rabbits, hares, other birds, reptiles and insects, although common preys in Patagonia include hares and even young foxes. They stalk their prey from the air, and dive to make the kill.

In Chile, they usually nest in cliffs and tall trees, as well as cacti in the northern areas of the country.